Back home I would have never ever visited one of these things, parked up in B&Q car park or on the side of the road. What grub would you be subjected to? Chips fried in dirty oil and served with watered down ketchup or perhaps a bacon buttie. Not that there is anything wrong with a bacon buttie as long as it is executed properly. 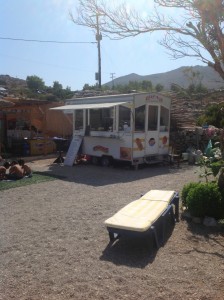 This little Kantina produced some amazing and delicious produce and I think the thing that made it amazing was that all the food it produced was fresh! Incredible Greek salad, pumpkin fritters made with mashed potato, garlic and dill. Char-grilled fresh tuna, souvlaki with rice and orzo and much, much more.

Our friends Elina and Valantis run a tavern in the small Greek island of Halki. 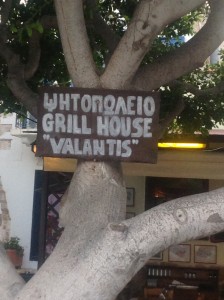 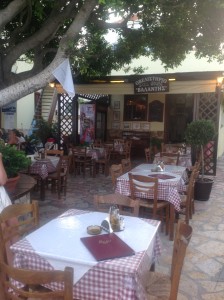 They make all their own sausages and hamburgers (no horse involved – sorry could not resist adding that one in). They are the most delicious sausages and hamburgers you can ever clap your laughing gear around. Elina is a charismatic lady who is truly dynamic when it comes to serving more than 100 people a day on the tables alone, not to mention countless numbers who use the grill bar’s original take away service. Elina always does this with a smile and a witty comment fast on her lips that makes you giggle. She is a diamond of a waitress, so amazingly fast, and having done silver and gueridon waitressing myself she has my huge respect and I love watching her perform magic with her customers.

Everything made at Valantis is fresh. It is a small island so food, including meats, is either grown here on the island or brought in by boat which is the only way to get to the island. If it is brought in it is done so alive and butchered locally. That might be a little too much information but if you eat meat that is how it is. In many ways their animals have a far nicer existence by comparison to some of our intensively reared stock. The hamburgers and sausages are made with herbs and seasonings from the island, and I would say are more of a real and pure food then many of the hamburgers and sausages we get in our supermarkets and take away bars – eat your heart out ALL FAST FOOD HAMBURGER CHAINS – you haven’t lived without trying one of these babies, anything else fades into insignificance. They are truly delicious and have no need of a silly little gherkin and pathetic toy in a box or anything else for that matter.

Valantis likes a joke and constantly calls my son Jack Sparrow. In fact there have been reported sightings of friendly pirates trying to smuggle Valentis’s sausages along with his very secret treasure (the recipes) from him. So far the pirates have been unsuccessful. Elina and Valantis are experts when it comes to pirates and the history of the island boasts an impressive castle made in the 12th century as a deterrent to all passing pirates from stealing from them…a very clever ploy on their part.

Thankfully today the pirates that visit this very small and peaceful Dodecanese island are far friendlier, although a little bit cheeky and it is hard these days to work out who are the pirates and who are just ordinary visiting boat folk. Many boats of all shapes and sizes are often stopping to re-fuel and grab some lemons and ouzo so they may continue along their passage. Not being a pirate expert myself I thought that Valantis and Elina could fill me in on what to look out for… 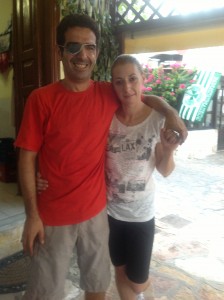 Modern day friendly pirate tips from Elina and Valantis and the Grill Bar:

Pirates are often in disguise in order to integrate into the normal population – watch out for bare footed people they could be pirates. According to Elina their favourite food at the Grill Bar is either crackling pork or sausages. I must admit I too could be seen as a pirate as this pork cooked on a roasting spit is very yummy. Apparently they are also quite partial to one of the Grill Bar’s homemade cheese burgers.

Elina also admitted that they have quite a few pirate friends, one called Thomas who we were introduced to and who has been seen wandering around the small harbour of Halki bare-footed.

My suspicions were also confirmed when I asked the most daring questions of all: “Is Valantis a secret pirate?” This was confirmed by Elina to be the truth of the matter. He has in his possession a black skull and crossbones flag which definitely confirms it for me.

So if you want to meet a real but very friendly pirate who makes real food, why not visit Halki and the Valantis grill bar. But whatever you do don’t ask him where he has hidden his treasure.

There are always new adventures to be had, things to do, places to go, people to meet and so very much to learn. That is the great thing about life!  Take my friend Yannis and his family who run a beautifully appointed café called Costa’s on a Dodecanese island. 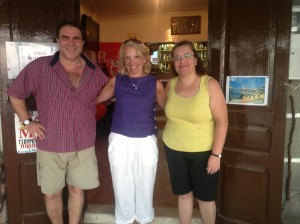 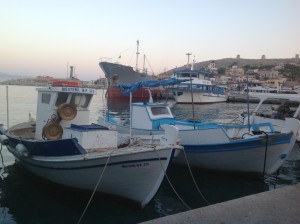 They are such lovely people and if I had not visited this island six years ago I would have never had had the wonderful opportunity of meeting them. Not only do they serve the very best ice cream milkshake (made from a choice of over 16 different flavours  – mastic, tiramisu, caramel and of course chocolate to name but a few). According to my children Yannis makes the ‘bestest’ ice cream milkshake in the world! Let me clarify that by saying my children are fairly well travelled and have taste tested many ice creams, glaces and gelato so apologies to the Italians amongst you. 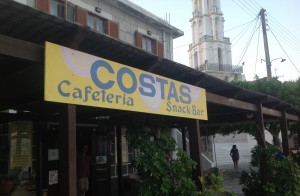 Being a health fanatic I try to resist yet find myself taking a slurp, with my children looking at me in great disgust resenting being deprived or separated from their beloved milkshake…even to the extent of the miniscule droplet that I steal of its deliciousness.

Yannis not only makes fabulous milkshakes but he has a terrific knowledge of this island and its secret treasures. And when I say treasure maybe you imagine a trunkful of glistening jewellery with stones, blood-red rubies and diamonds so bright that you have to put your sunglasses on to gaze at them. But to me treasure comes in the forms of food made with love and passion and tasting mighty fine. Yannis has this knowledge that I seek and I feel very privileged that he shared one of the items of my desire – Kouleria (Greek bread, a special recipe for this particular island). Having said that I am not sharing that recipe with you guys – but I will share his knowledge on a spice called mastic cultivated only in the Greek island of Chios…this is what it looks like: 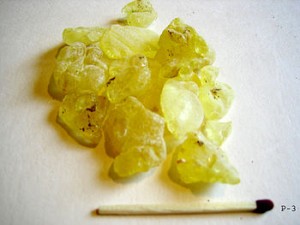 Mastic is a resin obtained from a tree. It has a very distinct flavour and has numerous uses such as in chewing gum, ice cream, soups and sauces, cakes and a special liquor in Greece called Masticatois. Mastic also has medicinal properties and can be used as an antibacterial and antifungal. It is also used in ointments for skin disorders and it is said that mastic is able to aid in the fight to lower cholesterol. All this and much more from a small tree – what an amazing world we live in.