Some of the children Chesham Prep were getting ready to move on to their next school, my son being one of them who had experienced seven fantastic years. It is such an emotional time when your child changes school especially when he has been so very happy and what a send off all the children experienced! As well as special trips out all week long (one being going sledging in the middle of summer – what fun!) they also experienced a very special night – a dinner dinner dance organised and created by the Headmaster’s wife Isabelle Davies. Not only is she passionate about her food, she works very hard and puts great care and attention to special events in the school. Isabelle designed the menu and the beautiful table decorations. A good time was had by all, a fantastic send off, their next schools will havea lot to compete with. 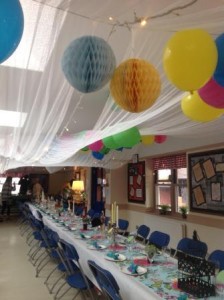 In preperation, Jewelled rice boats – just one of the dishes we made: 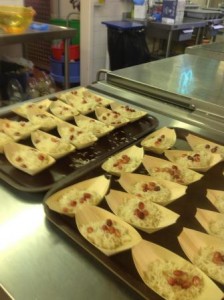 Friday, July 4th, was American Independence Day and here at CPS we have been having our own celebration focussing on the newest state in the US – Hawaii.  We have been dusting down our grass skirts and trying traditional Hawaiian cuisine.  Amazingly Spam is a popular meat there, dating back to the posting of a sizable number of US troops to the islands during World War Two.  With the troops came their rations which is where the tins of Spam came in.  Having discovered the delights of this tinned meat the Hawaiians incorporated it into their traditional dishes, for example Spam Mushi (a Hawaiian version of Sushi).  However, it has not all been Spam, there has been coconut, chilli and pineapple galore.  Particular favourites have been coconut and lime chilli salmon with pineapple rice followed with coconut cake.  We spent all afternoon dreaming about lying on the beach and riding the surf!

The children also got to try lots of enjoy exotic fruit: 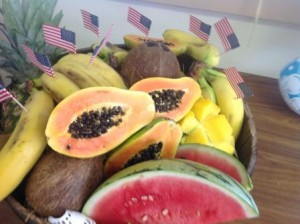 The children at CPS have been busy piling vegetables and other healthy food on to their plates recently.  Why?  – because I’ve been patrolling the dining hall wearing my Magic Glasses.  I am sure many of you are jealous of me and my Magic Glasses, after all who as a child didn’t long to own a pair.  Although you may have hoped to see through or around objects; see what wasn’t really there or just wanted to world around you look different, my special glasses help me see how much healthy food the children have on their plates.  Anyone with two of their five a day may get a chance to high-five me and try the glasses on for a bit.  Now what I don’t know is, are those glasses magic for everyone and what do they show? Could some see people turned into pirates, footballers or princesses or could the teachers even be turned into monsters…….watch out the Magic Glasses are about!