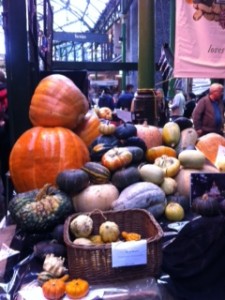 If you’re a foodie like me you will love Borough Market www.boroughmarket.org.uk/. It’s situated right next to London Bridge and this area of London has been known for having markets dating back to 1014. We took the kids and glanced at St Paul’s Cathedral before crossing the no longer bouncy Millennium Bridge. There were lots of things to see with busker’s music to tap your feet to along the way. Past The Clink, the first ever English prison museum, and into Borough Market. In the 13th century grain, veg and livestock would have been sold here – today there are over a hundred stalls offering a variety of produce to munch and enjoy. I was particularly impressed with the selection of fruit and veg on offer, lots of items here cheaper than most supermarkets with a far larger choice of varieties. For instance, if you are a mushroom lover this is the place for you, they had an amazing selection – the biggest I have ever seen. Tons of interesting cheeses including Vacherin which must be (in my book) one of the smelliest cheeses in the world. We found some purple carrots introduced by the Romans and some yellow carrots which I had never clapped eyes on before. All this was a great education for the children and adults alike. 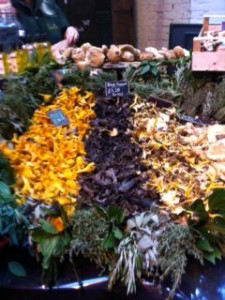 Just some of the mushrooms on display 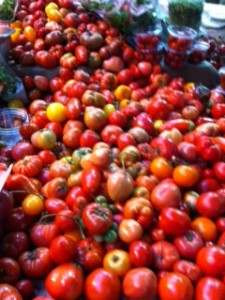 My children particularly liked the homemade bread and cake stalls where we purchased an amazing chocolate brownie and some beautiful spelt bread, the popularity of which appears to be on the increase. There were also tons of stalls selling handmade burgers and good old fashioned truly English bacon and bubble baps (very authentic British grub mixed with tons of traditional Italian, French, Turkish and Greek produce). A mish mash of goodies all under one roof. We also spotted some unusual produce from The Exotic Meat Company, a small family based company in North Nottinghamshire offering everything from Ostrich to carefully sourced meats from around the world such as Kangaroo steaks, Springbok meatballs and Crocodile tail fillets. You can find out more about them at www.gamstonwoodfarm.com. Whatever floats a foodie’s boat, there was something for everyone. It is worth a visit on a dull weekend as we have plenty of those to come now that winter is on its way – why not add a little colour into them!