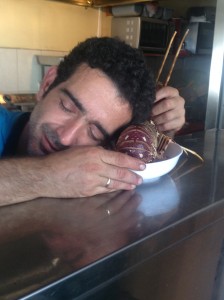 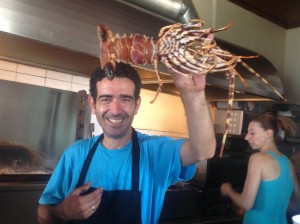 Most young children wake up snuggled to their favourite teddy but Valentis (chef extraordinaire) woke up surrounded by lobsters. Why? Because Valentis’s father is a fisherman and at the age of six he would take Valentis in his boat fishing with him.  As Valentis slept in his hammock his father was busy catching lobsters. The noise of the clapping lobsters used to work well as an alarm clock to wake him up! I think I will stick to the traditional way of waking with an alarm clock and a very kind husband’s lovely coffee.

To prepare a lobster for cooking: when I was training as a young commis chef we were taught to use a sharp knife to dig straight into the lobsters head right between the eyes killing it instantly. For me this appears to be a far more humane way, others prefer to immerse them in boiling water.

Cooking lobster at Valentis’s grill bar: You can cook lobster in many different ways; in Halki they do a wonderful lobster spaghetti where all of the lobster, including the shell, is used to produce a most delicious flavoured sauce which soaks into the spaghetti making a most sumptuous, flavoursome meal. However I prefer mine grilled and at Valentis’s grill my lobster was cooked beautifully. The Greeks say that the meat in the lobster’s head is the sweetest. My lobster was also full of beautiful pink roe which tastes most delicious, a sweet delicate flavour, with a smooth light texture. The lobster was served with a sauce in a separate bowl of lemon and olive oil with oregano . Now lobster is one of my most favourite foods to eat and this was the best lobster I had tasted in 15 years. It was fresh Halki lobster, not brought in from another island, and was like a fresh fruit handpicked from a tree, ready and ripe to eat. It was truly divine and a thing of (unusual!) beauty to look at. 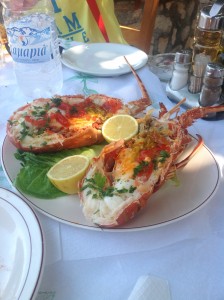 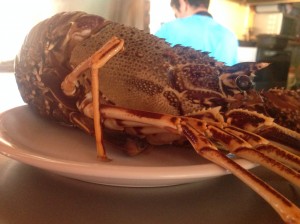